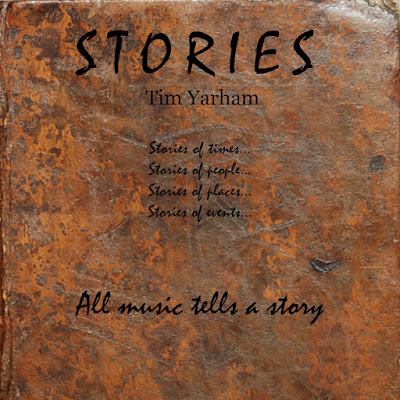 Stories is an album of program music, or music that tells a story. Each work describes a person, a place, a time... each tells a different story. Read further for some of the story behind each work. 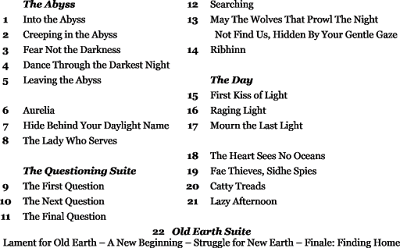 The Abyss is inspired by the work of E.J. Dawson, an upcoming Australian author. Dawson created a world of mystery and adventure. The Abyss portrays an exhibition in this world, a group of adventurers who find themselves lost, their only way out to travel through a vast abyss.

Slowly they make their way down, trying not to fall to their dooms. Once in the darkness and the cold, they carefully creep along, flinching at every noise and movement. But even in the darkest of nights, there is still hope, and an opportunity to celebrate life. Finally, the party of adventurers makes their way through the Abyss and leaves safely.

Quiet, subtle, quick to hide herself but a delight to know. Raise a glass in memory of Aurelia.

Hide Behind Your Daylight Name

We all have two names, all of us. Our Daylight Name is that by which we are known in the light. Yet, in the darkness of night, our true selves can be sensed, but never seen.

The Lady Who Serves

Among those who serve are those who act selflessly and tirelessly for their cause, working when others may fall aside. Without expectation of recognition or reward, this lady has served others in a quest for the betterment of the world.

A cello trio linked by a common theme and progression. We all have questions, sometimes those questions are answered and sometimes they remain for our lives.

What is lost may be found, but not yet. Until that time the search will continue... for life, for meaning, for the unknown.

May The Wolves That Prowl The Night Not Find Us, Hidden By Your Gentle Gaze

A hymn to Someone unknown and unknowable, but Someone felt in the dark of the night. Gather close to each other and be safe.

Dedicated to and written for Heather Dale, Ribhinn is a Scottish-Gaelic word for lass or maiden.

The Day is a short piano work that describes a day by the light, from the first blush of dawn, through the raging heat of noon, to the last traces falling below the horizon.

The Heart Sees No Oceans

Many of us have loved ones far, far away, across the oceans. No matter the distance, or the time between contact, the heart doesn't see the oceans. The heart only sees what it will see.

A dark and gloomy office block, tucked away as if to hide from the sun that only rarely shows its face. The evening rain streams down as a figure in a billowing cloak moves quietly along the street and through the door. Follow her up the stairs to an office door, with weathered gold writing saying "Catty Treads - Private Detective".

The real Cat is a Druid Priest working in UK, but also available via electronic means.

Premiered in 2010 by Mount Isa's premiere big band Bandana, Lazy Afternoon is a work for big band that portrays the simple pleasures in life. There was some debate about an alternative title - Sleazy Afternoon.

Old Earth Suite was started a number of years ago but truly came together in mid-2014. As I was pulling together the orchestration, I found out that a very close friend of mine was dying of cancer. This suite is dedicated to her, though she never had a chance to hear it performed.

At its most basic, the Old Earth Suite is a science fiction story. The world has been destroyed, or abandoned. The opening lament reflects on the Earth that Was, full of wonder and life. The second movement, A New Beginning, depicts a small group of people sitting around a campfire, finding joy in a simple dance. Struggle for New Earth is about the stories of different people, sometimes working together, sometimes separately, all working towards the New Earth. The Finale is the triumph of a journey completed, a new home.

On a deeper level, the Old Earth Suite is also the story of a life. Replace the word 'Earth' with 'Life'. It represents a journey through difficult times, when hope was fading, but in the end we triumph once again.

The world premiere of the Old Earth Suite was performed by the Noosa Orchestra in September 2015.

Email ThisBlogThis!Share to TwitterShare to FacebookShare to Pinterest
Home